[G] New Sidebars for All

Inside Google Desktop: New Sidebars for All

Happy Holidays! Santa has delivered Google Desktop 4.5 in 27 more languages -- and the Japanese version is also coming out of beta. Now everyone can take advantage of new features, including:

Transparent Sidebar - The new Sidebar fits seamlessly with your desktop environment. Gadgets look right at home in the Sidebar and content-heavy gadgets are easier to tell apart with new frames and icons. And you can still have the Sidebar "Always on top," "not on top," or in "Auto-hide" mode.

Compatibility with the latest software - This new version is compatible with Microsoft Vista, Office 2007 and Mozilla Firefox 2.0.

The Google Desktop documentation and SDK have also been updated. It's easier than ever for first-time and experienced developers to create gadgets. We can't wait to see more of them!

We've released some very fun and festive gadgets just in time for the holidays! Try these out:

Many thanks to the talented developers of these fine gadgets. We encourage all of you to create and share yours for holidays you celebrate. To get started, visit our Developer Site and be sure to grab the Google Desktop SDK.

If you're in the U.S. and you have a Mac, try this: Launch Google Earth, wait for the zooming to stop, and then press the + button to zoom closer. You'll arrive at the small town of Chanute, Kansas, nestled in the southeast corner of the state. I doubt you've ever noticed this before now. But even if you have, you're probably wondering -- why Chanute?

There are several reasons. The most important reason is that I was born and raised there. I grew up on a small farm, and while everyone else was out feeding the ducks and milking the cows, I was inside making electronic contraptions and eventually programming computers (which would scarcely be recognized as such today, since my first computer had only 256 bytes of memory and a dual hexadecimal LED display). 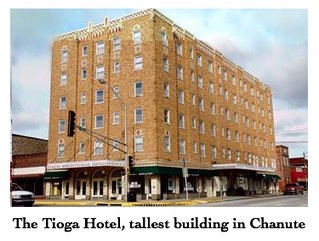 The second reason I chose Chanute is that it's near the geographic center of the 48 contiguous states. If I had been born in, say, New Hampshire, I never would have thought to tamper with the Google Earth coordinates.

And the last reason is that my co-worker Brian McClendon, who grew up in Lawrence, Kansas, had already positioned the Windows version of Google Earth (which shipped a few months earlier than the Mac version) at his hometown. I guess you could say that Brian's shenanigans inspired my own.

But the choice of Chanute is not without controversy. Because it's farther than Lawrence from the geographic center of the 48 states, and since (as of this writing) the satellite imagery at Chanute is not as crisp, it could be interpreted as a less user-friendly choice, which is not in keeping with the Macintosh tradition. But don't let that fool you -- the people in Chanute are as friendly as they come. Stop by sometime and say hello -- and be sure to tell them Dan sent you.

This blog is not affiliated with Google™. It is a service intended to provide easy and convenient access to all news and events from inside Google™.