Posted by Tim Smith, Vice President of Digital at Imagination

Editor's note: Today’s guest blogger is Tim Smith, Vice President of Digital at Imagination, a Chicago-based content marketing firm. See what other organizations that have gone Google have to say. 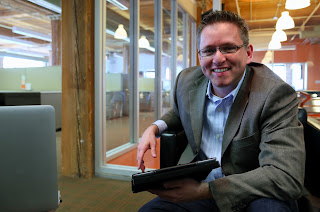 Imagination is a content marketing agency that helps companies connect and engage with their target audiences. Businesses like Wells Fargo, General Mills and US Foods turn to us when they want to reach their customers, and we make it happen by creating interesting and engaging content and distributing it across print, digital, broadcast and social media. We place a premium on creating smart strategies and executing on them quickly, so efficient and clear communication matters to us.

Last summer, we realized our technology was getting in the way of our ability to connect and engage with our own customers. We’d recently switched to Microsoft Office 365 as part of a larger company-wide move to the cloud, but ran into a number of problems we couldn’t ignore. Server connection issues prevented us from accessing our documents and Outlook crashes kept us from reading or sending email. Fifty percent of our help desk tickets were for email alone. And whenever a problem arose, we had to hire an expensive Microsoft consultant to fix the issue. When I stopped and realized we had a managed service provider in our office two to three times each week, it struck me: this was not the right IT solution for our agile, quick-moving and collaborative company. So we turned to Google Apps.

Once we had the support of the executive team, I reached out to Cloudbakers, a Google Apps Reseller based near our office in Chicago. They had done numerous deployments for companies like ours before, so they had a well-informed, specific step-by-step plan in place when we first sat down to talk details. They came on-site and ran in-person training for our employees, so everyone felt properly prepared to tackle their work using the new technology without skipping a beat.

Moving to Apps made our IT headache disappear. Help tickets have decreased by 50 percent and we’re on track to save $24,000 per year in help desk and downtime reduction alone. Employees no longer complain about VPN logins or email client configuration; now they can sign on to their account from any device and have everything they need at their fingertips. We don’t encounter hardware issues that make work come grinding to a halt; employees can simply sign into a spare device and instantaneously access their email and files.

Our employees have really embraced Apps, and we've seen a strong trend where teams are adopted new products and features organically. Everyone stores their important documents, presentation and spreadsheets on Google Drive. There’s also been a massive drop in the use of Microsoft Excel in the past few months as people start picking up Google Sheets and Docs. As a data enthusiast, I can’t get enough of the Drive dashboard. It’s revealed a fascinating trend where use of Excel and Word is dropping while the number of Docs and Sheets is shooting up.

We’re in the midst of evaluating a new CRM system, and our COO has one requirement: it has to integrate with Google Apps. Now that’s a success story every IT manager likes to share.

Inside AdWords: 4 ways to win in retail this 4th of July with DoubleClick Search

This post originally appeared on the DoubleClick Search Blog

Ah, the 4th of July: a time for day-long picnics at the park, fishing trips by the lake, night skies filled with fireworks -- and of course, shopping. If you’re a search marketer focused on retail, you know that holidays like the upcoming 4th of July can be an enormous opportunity to capture additional traffic from shoppers looking for the best deals online. So while you’re planning your annual hot dog eating contest, we want to help you start a new tradition this year to win in retail, using integrated solutions from DoubleClick Search. Today, we’re offering up a few retail-ready features to make sure you kick off your holiday search campaigns with a bang:

Don’t miss a beat this year. With solutions from DoubleClick Search, connect to in-market audiences with the right messages, and report on it all in real-time to capture even more seasonal opportunities. Now that’s certainly something to celebrate!

[G] GoogleServe 2013: Giving back on a global scale

Official Blog: GoogleServe 2013: Giving back on a global scale

Every year in June comes a week where Googlers around the world stop reviewing code, ignore their inboxes and leave their cubicles behind to participate in GoogleServe, our global week of service.

This year, more than 8,500 Googlers from 75+ offices participated in 500 projects. Not only was this our largest GoogleServe to date, but it was also one of the more unique, as many projects were designed to expand the notion of what it means to give back to the community. Here’s a glimpse at some of what we were up to this year: 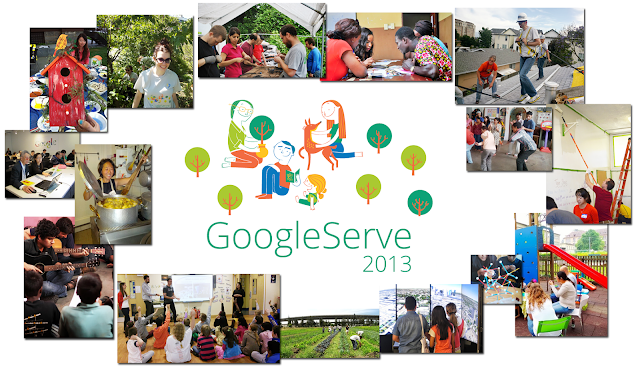 Click for more photos from this year's GoogleServe
Over the past six years, GoogleServe has transformed from a single week of service into a week of celebration and inspiration for ongoing giving. Googlers also give back year-round through our GooglersGive programs which include 20 hours of work time annually to volunteer with an approved charitable organization. If you’re inspired to join us, please check out All for Good or VolunteerMatch for opportunities to give back in your community.

Posted by Zanoon Nissar, on behalf of the GoogleServe Global Leadership Team


Do you remember the villain’s secret island hideout in the latest James Bond movie Skyfall, the one that looked like a decaying industrial wasteland? That fictional location was actually based on a real place — the island of Hashima off the coast of Nagasaki Prefecture in Japan. Due to its unique flat shape, the island is most widely known in Japan by its nickname Gunkanjima — aka “Battleship Island.”

Starting in the late 19th century, Hashima served as a coal mining facility and residential complex for 5,000 people. After the decline of coal mining in the 1970s, however, the island became completely abandoned, only opening up again to tourists in 2009. Hashima has transformed into an eerie tourist destination where you can see a once thriving town decaying and totally devoid of life. Apparently, Hashima’s buildings are deteriorating so rapidly that you can hear parts of the concrete collapse as the wind blows from the ocean.

While we can’t replicate those unearthly sounds on Google Maps, we can now give you 360° panoramas of the Hashima with today’s launch of Street View imagery for the island. Thanks to assistance from Nagasaki City, we were able to collect imagery with the Google Trekker beyond the cordoned-off areas for tourists and into off-limits paths around the island. We also used our Business Photos technology to let you peek into the abandoned buildings, complete with ancient black-and-white TVs and discarded soda bottles.

View Larger Map
Winds have been very unkind to Hashima over the last several decades, and with the buildings falling apart, we hope this imagery can serve as a digital archive of its current state before further collapse. Today you can virtually explore the ruins of Hashima, pretending you’re James Bond waiting to be rescued. If you are really inspired, you can visit the real place next time you get down to Nagasaki, Japan.

Inside AdSense: Changes in rankings of smartphone results

As the number of smartphone users continues to surge globally, many of you are responding quickly with mobile-friendly sites. Regardless of the device a user views your site on, their experience should be rich and consistent. With this in mind, the Google Webmaster Team is making some changes to the way they rank search results on smartphones. In particular, these changes will address sites that are misconfigured for smartphone users. Read the original post and learn more about common configuration mistakes as well as recommendations from the Webmaster Team on building your mobile-optimized website.

Posted by Suzanne Headon - Inside AdSense team
Was this blog post useful? Share your feedback with us.

This blog is not affiliated with Google™. It is a service intended to provide easy and convenient access to all news and events from inside Google™.